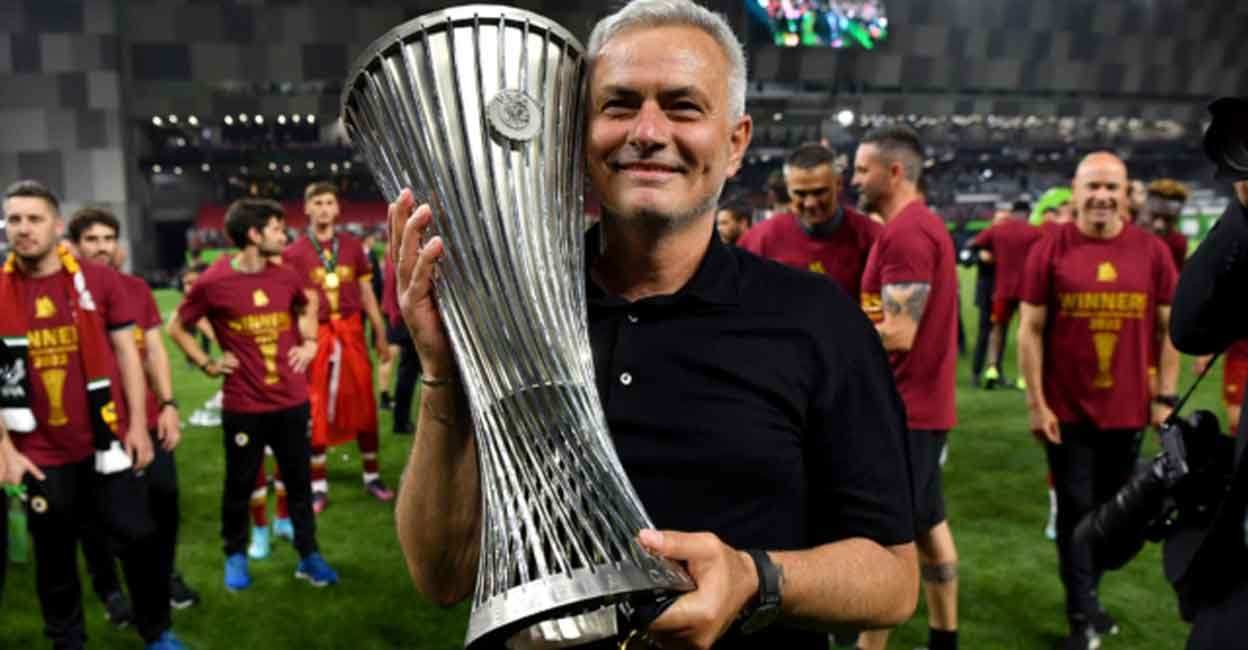 Tirana: Nicolo Zaniolo’s goal won AS Roma a first major European title in over 60 years after a 1-0 win over Feyenoord in the Europa Conference League final in Albania on Wednesday, completing a European trophy unique for Jose Mourinho.

Roma manager Mourinho, who has already won the Champions League, Europa League and UEFA Cup with other clubs, can now add the third-tier European title – the Italian side’s first trophy in 14 years old – to his medal list.

Zaniolo, 22, secured Roma victory with a clever 32nd-minute finish, becoming the first Italian to score in a European final since Filippo Inzaghi against Liverpool in the 2007 Champions League.

Roma, whose only previous continental title was the old Fairs Cup in 1961, held off a fiery comeback from their Dutch opponents, who were twice denied by the woodwork in the second half.

“We are a real team, we have proven that. Now we have to celebrate and start again, which is always difficult after a big victory, but a real team wins, celebrates and starts again,” said Roma captain Lorenzo Pellegrini at Sky Sport Italia. .

“I said yesterday that I would never have imagined at 25 to achieve this with the Roma shirt and the captain’s armband. It’s a wonderful moment.”

Given that Roma and Feyenoord entered the competition having already secured Europa League football for next season thanks to their position in the domestic league, it was all about glory in Tirana.

At first it looked like there would be just one winner as Roma dominated the opening exchanges, undisturbed by Feyenoord goalkeeper Justin Bijlow, playing his first game since March 10.

A chance was all they needed to hold the lead in the interval, Zaniolo brilliantly bringing the ball back to his chest before scoring his first goal in all competitions since a quarter-final hat-trick against Bodo/Glimt.

Zaniolo also became the youngest Italian to score in a European grand final since Alessandro Del Piero against Borussia Dortmund in the Champions League in May 1997.

Feyenoord, who are looking to be the first Dutch club to win European competition in 20 years since their 2002 UEFA Cup triumph, didn’t really test Rui Patricio in the Roma goal in the first half.

Still, they started the second half with flying colors, with Roma’s Gianluca Mancini deflecting an early Feyenoord corner at his own post.

The Dutch followed through and struck again into the woodwork as Tyrell Malacia’s superb strike from 25 yards was deflected off the post by Patricio.

Other chances came and went, but a few last-minute blocks and unnecessary finishings ensured that Roma’s long wait for a European trophy would come to an end in Mourinho’s first season in the Italian capital.

“We really wanted to take this cup with us, thank the fans and put Feyenoord back on the map, unfortunately it didn’t work out like that,” Bijlow said.

“We put pressure on them and then you saw they struggled to manage us. But unfortunately that wasn’t good enough. It’s especially terrible that we couldn’t bring the cup to Rotterdam.”