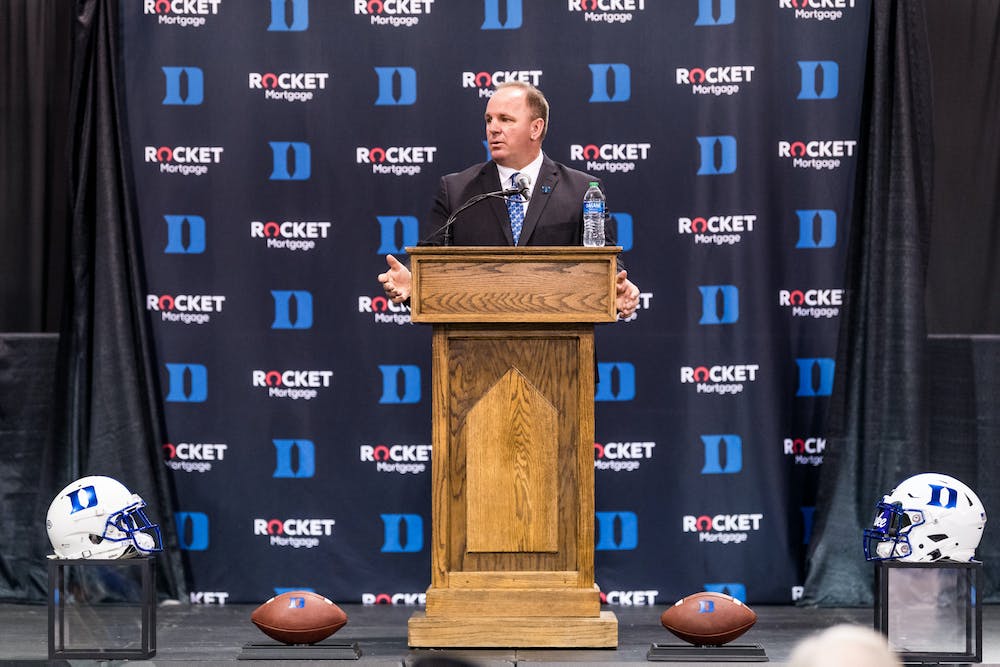 As 2021 draws to a close, The Chronicle’s sports department looks back on the biggest stories of the year in Duke’s athletics. Each day we’ll go over a major game, event, or storyline that helped shape the course of the year for the Blue Devils.

David Cutcliffe transformed Duke’s football during the first half of his tenure at Durham. Between 2012 and 2018, he led the Blue Devils to six bowl games in seven years, a streak that also included an appearance in the CCA championship game in 2013 and the program’s first bowl victory since 1960 in 2015.

But all successful races (or at least most) eventually come to an end, and over the past three years, Cutcliffe’s previous success at Duke had become a distant memory. The Blue Devils are 4-22 in the ACC since 2019, with their 0-8 conference record last season (the program’s first winless season in the ACC since 2006) proving to be the dagger . On November 28, just a day after the team’s 47-10 loss to Miami in the regular season finale, Duke announced that he had parted ways with Cutcliffe.

Initially, it was unclear who the program would turn to for the next era of Duke football. But the following week, several names emerged as candidates, including Clemson offensive coordinator Tony Elliott, Texas A&M defensive coordinator Mike Elko, and even former New York Giants offensive coordinator Jason Garrett. And after Elliott took the vacant head coach position at Virginia, the Blue Devils seized the opportunity to catch Elko, officially hiring him as Duke Football’s next head coach on December 10.

Elko comes to Durham with 18 years of experience as a defensive coordinator, including the last four seasons at Texas A&M, one with Notre Dame and 12 with head coach Dave Clawson by his side at Fordham, Richmond, Bowling Green and Wake Forest. He has held various positions since 1999, one year after a four-year career as a security in Pennsylvania.

The New Jersey native touched on a variety of topics throughout his introductory press conference on Dec. 13, including the need for student support, his ambition to bring the championships back to Durham and his goals on the track. recruitment. The latter was the most immediate concern for Elko, his hiring coming just five days before National Signing Day. Ultimately, however, he managed to retain all of the players in Cutcliffe’s recruiting class of 2022, which ranks 53rd in the country and ninth in the ACC.

It will probably be some time before Duke becomes a real competitor to the ACC. However, Elko’s confidence throughout his first few weeks on the job seems to have sparked new energy throughout the program that ultimately took Duke’s football to the heights Cutcliffe has proven this program can achieve.

Get overtime, all Duke athletics

Subscribe to our weekly newsletter organized by an editorial. Cancel anytime.

‘Roll up our sleeves and get to work’: Mike Elko presents his vision of Duke football

Duke Football welcomes 16 members of the Recruiting Class of 2022