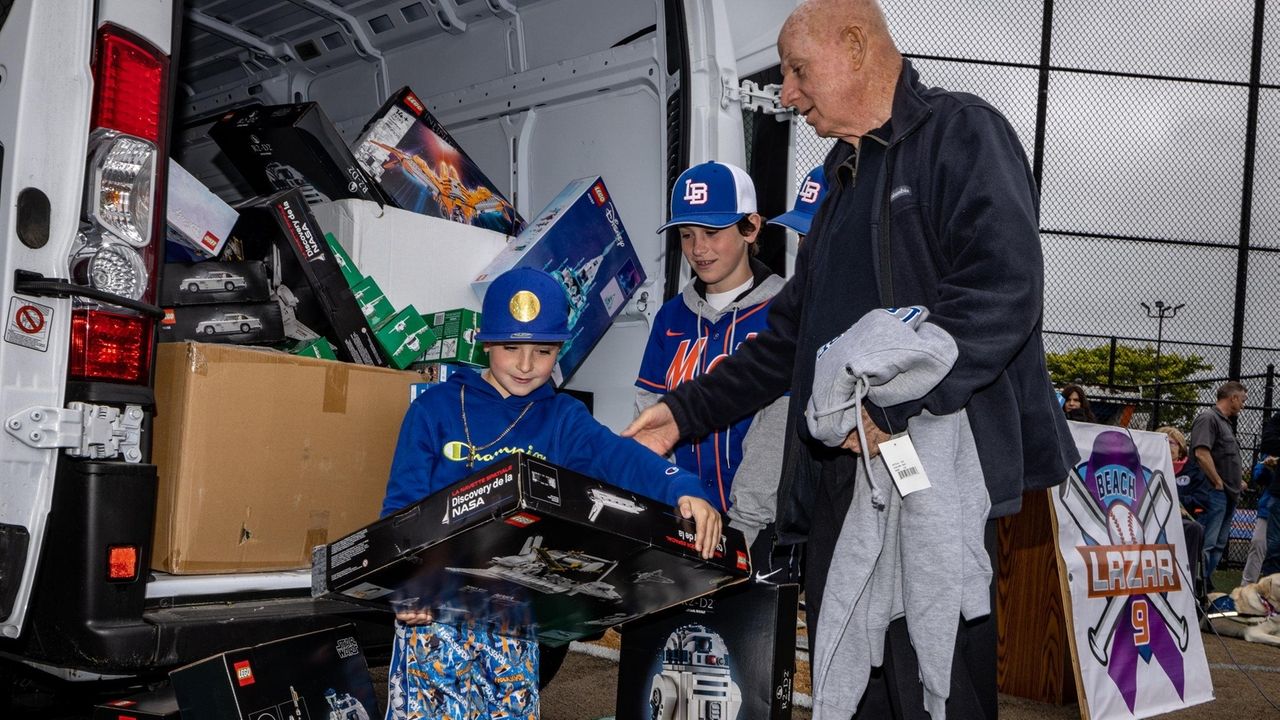 Charity Marines Toys for Tots dedicated this year’s toy drive Thursday to Lazar, the Long Beach little leaguer who collapsed and died of a seizure on the Point Lookout field. in a game last month.

Lazar’s name and the number 9 – the number he chose for his baseball jersey – are emblazoned on shop windows across the city, and purple ribbons and flags in his honor surround the Long Beach Recreation Center and border Park Avenue and Lido Boulevard to the land where he played in Point Lookout.

Lazar’s father, Gregg LaPenna, said community support has kept the family together through their grief. When asked what baseball meant to his son, he broke down sobbing.

Toys for Tots in honor of Lazar LaPenna

“I’m incredibly overwhelmed with the love and support. I don’t think I’d be able to stand here without it,” LaPenna said, outside the recreation center where he accepted a truckload of toys donated in memory of his son.

“Every day is a living nightmare and this love and support keeps us going,” LaPenna said.

The Toys for Tots Foundation named Lazar co-chair of this year’s campaign that aims to collect and distribute 750,000 toys to children on Long Island. He was also made an honorary sailor.

“The one thing in the Marine Corps that we believe we have to do in life is remember. And we’re going to remember this little boy Lazar and everywhere we go we’re going to donate in his name,” said veteran Navy Major Chuck Kilbride. “We are going to pay tribute to this little boy for his zest for life, his joy in playing the ball and his love of family.”

The family has asked Toys for Tots to donate 600 toys in Lazar’s name to the Long Beach Christmas Angels, who will distribute toys including classic Nintendo systems, trucks and Lego sets through the school district, daycare centers and churches to the children of Long Beach.

Long Beach City Councilwoman Tina Posterli said the city stands with the family as she proclaims ‘No. 9 forever.

“One thing about Long Beach, we come together as a community and we will always honor and support this family and the memory of Lazar,” Posterli said.

On the Point Lookout grounds, tributes to Lazar hang on the fence, including painted seashells: one painted like a baseball and the other painted purple and reading “Lazar #9.” His teammates and friends also hung baseball caps and jerseys on the dugout fence with a dozen baseballs resting on them.

A permanent plaque will hang at the Long Beach Recreation Center naming Lazar as the “biggest Mets fan” and co-chair of the Toys for Tots campaign.

“Known for his Long Beach/Lido Beach Little League team spirit, passion for baseball and love of family and friends,” the plaque reads. “Rest in peace in batter heaven. One last shot! #BatsOutForLazar.

John Asbury covers the town of Hempstead and the town of Long Beach. He has worked for Newsday since 2014 and previously covered crime for nine years for The Press-Enterprise in Riverside, California.