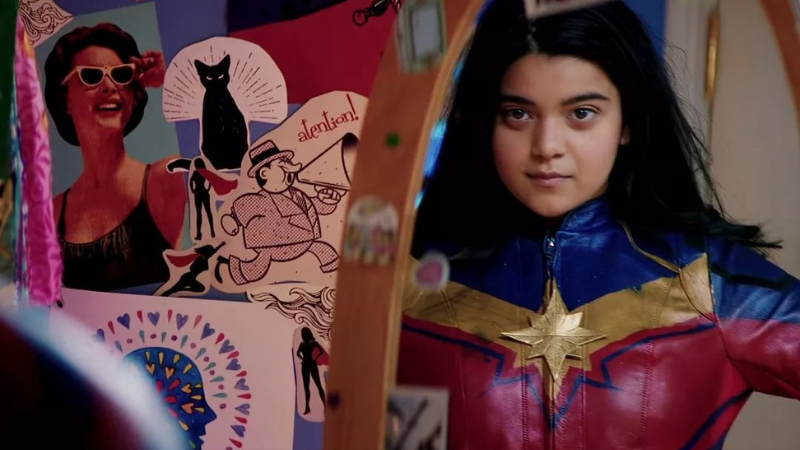 Director Sharmeen Obaid-Chinoy thinks the show is a celebratory moment for Pakistan.

This writer is envious of Sharmeen Obaid-Chinoy. No, not because she has two Oscars, four Emmys and a Marvel series under her belt; it is something to be proud of. I envy something else: Sharmeen’s stamina.

Flying in and out of cities and countries, Sharmeen is either on a plane, in a car, at an event, on sets, producing and now directing. Although quick when responding to messages, Sharmeen management often shifts our phone calls and interviews between minutes and hours later. That she’s busy is an understatement.

Sharmeen laughs when I mention her schedule. That’ll get even tougher, we assume, with the release of her live-action directorial debut on Marvel’s upcoming high-profile series, Ms. Marvel – a six-episode Disney+ series that is making its Pakistan-exclusive theatrical release through Pakistani distributor HKC as three two-hour films.

As the show kicks off on June 8, Pakistani audiences can see the films on June 16 (Episodes 1 & 2), June 30 (Episodes 3 & 4) and July 14 (Episodes 5 & 6), Hammad Chaudhry, the head of HKC, tells Icon. The decision, as anyone can guess, stems from the fact that Disney+ has yet to debut in Pakistan (the service is in India as Disney-Hotstar).

Mrs. Wonder isn’t just about cheering on a brown-skinned superheroine; it is about representing a culture and a country in the world

Originally the nickname Ms. Marvel belonged to Carol Danvers. However, she is not the same character or has the same power as Carol, who is played in the cinematic universe by Brie Larson. Debut in Captain Marvelnumber 14 in 2013, and six months later, featured in his solo comic, Ms. Marvel, Kamala is polymorphic – she can elongate her body, change size and even transform into people. Think of her as a mix of Mr. Fantastic from the fantastic four and Ant-Man from avengers.

What makes Kamala truly distinct is that she is a teenager with American-Pakistani heritage. Living in Jersey City, Kamala is the equivalent of Peter Parker – she’s a young middle-class/lower-middle-class girl (Parker was from Queens), who has yet to find her footing and is propelled in the superhero world.

Also, for once, the character’s religion and ethnicity are not used as a crucial point or obstacle.

Amanat, herself a Pakistani-American, was born in Jersey City, and given the character’s comic book history, the relevance of having a Muslim and Pakistani creative pool has not been lost on Marvel Studios.

The show pushes the boundaries when it comes to racial diversity; it’s not just about “dark skin”. Ms. Marvel has a strong representation of Pakistani talent.

Besides Sharmeen, who directs two episodes (the other four episodes are directed by other directors), the series is “created” (i.e. developed) for Disney+ by Bisha K. Ali, British-Pakistani actress and screenwriter (she wrote by Loki episode laments), and titles Iman Vellani, a Canadian-Pakistani, as Kamala.

Homegrown talent from Pakistan also has some visibility under the marquee, Icon learned from official and unofficial sources.

A bit of a legwork (well, phone work) via this writer’s own sources has confirmed that Mehwish has a starring role in the show – so consider this unofficial confirmation, until the actress finally appears in an episode. Nimra Buccha apparently has an even juicier role, we hear, as the main villain.

Which characters these actors – officially announced or not – play, remains ambiguous, and again, neither Sharmeen nor Hammad gave this publication an iota of information (because of the ironclad contracts, we suppose).

Sharmeen and Hammad, however, think it’s a celebratory time for Pakistan. With Ms. Marvel, Pakistan is finally portrayed in a fair, apolitical and non-controversial light. As this writer wrote above, the project isn’t just about celebrating racial inclusivity — it’s about the inclusivity of a country. The opportunity to be part of such a project was too good to pass up, says Sharmeen Icon.

Primarily a documentary filmmaker, Sharmeen has dabbled somewhat in narrative work since the 3 Bahadur movies and sitarashe explains, but most of the time, the producer-director wanted to “stay true to my philosophy” by telling stories that matter, that make people think and change the way we see problems.

Then, in 2020, she discovered that Ms. Marvel was looking for directors.

“For the first time, I said to myself: this is a project in which I would like to participate because it is a story that matters. [Kamala] is brunette, she’s South Asian, she has Pakistani roots and she’s Muslim,” Sharmeen said, adding that Marvel’s decision to add a superhero like Kamala gives “brown girls, minorities and so many people around the world a chance to see a reflection of themselves in character.

“Most importantly,” adds Sharmeen, “as a Pakistani woman, I know the importance of having a representation of language, food, clothing, music [in a big project like Ms. Marvel]and how it can help shape the global perspective of a culture and country.

In a large studio company, where everything is planned to perfection, how do you find your voice, I find out.

When it comes to creative inputs, Marvel Studios gave her carte blanche, she tells me. The director scouted her locations, worked with VFX, stunt teams and second unit directors on how her scenes looked and how she saw a particular power play out.

“The biggest thing Marvel did was put me with a team of extremely talented people who had worked in the company, who knew Marvel very well,” says Sharmeen (his second unit manager was Gary Powell, whose filmography includes Morbius, Ready Player One, Specter and celestial fall).

Her “orientation” with Marvel came during the three-month pre-production phase, where she spent a lot of time with each production department, letting them know what she thought they should be doing in terms of representation of Pakistani culture and, in turn, being informed of what was possible and how his ideas could be incorporated.

From the start, production designer Christopher Glass was very sensitive to the differences between Pakistani and Indian cultures, even though the cultures overlap in South Asian homes in places like Jersey City.

“The colors of the wall hangings, the designs that exist on the sets, that’s what you find in middle-class Pakistani people living in New Jersey,” says Sharmeen. The costumes, by Arjun Bhasin, are also extremely authentic to Pakistani culture and Pakistani immigrants.

“Arjun has done a wonderful job creating this kind of dichotomy. Once you immigrate and live in Jersey, you are also influenced by the cultures of India and Bangladesh. You get your sweets from Bengali confectioners, you buy something from an Indian shop, and I think that this authentic depiction of cultures is beautiful, because it’s the story of being a Pakistani Muslim immigrant in Jersey, but it’s is also to be South Asian.”

Speaking of Iman Vellani, Sharmeen says that “she is Kamala Khan – she lights up the screen when you see her. She brings an authentic voice as a first-generation Pakistani immigrant to North America, and her experiences are very similar to Kamala’s.

Readers of the comics may understand this aspect, but viewers of the Marvel Cinematic Universe may appreciate the details when the series hits Pakistani cinemas. For once, the story isn’t just about cheering on the heroes; it is about representing a culture and a country in the world.